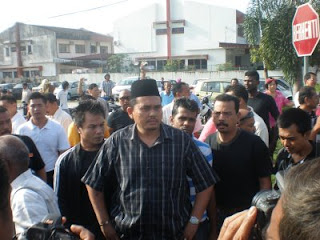 Teman terbaca kolum Raja Petra: "And to Nizar, well done. We were in Perak today and we are very honoured to have witnessed history in the making. This is the first time in history that a legitimate government was forced to conduct its business under a tree. I am going to propose a ceremony to place a bronze plaque under that tree so that generations to come can get to see the spot where the people took back power from the government, minus the bloodshed as well."

"This is Peoples’ Power in the true sense of the word. Syabas. I am proud of you, Nizar. By the powers invested in me, I now proclaim you an Honorary Bugis Warrior."

To me he is not just a Bugis warrior, he is a true Malay warrior, Indian warrior, Chinese warrior and the the best is, this man is a true Peoples' Warrior.

A Warrior who defends his people NOT his pockets, NOT his cronies, NOT his families.... What say you PEKIDA ?
Posted by UDE KENANG at 8:39 PTG